In Genesis the world may have been created in six days. But ask any ARVR developer and they’ll say that’s optimistic. Building realistic 3-D models takes time, often too much time…and effort. Taking a cue from industry, Aptima is developing a portal that will allow Air Force training developers to share critical assets rather than reinvent the wheel each time – from videos and 3-D models, to CAD files and animation. The secure portal is expected to accelerate the development of ARVR content to unlock its potential for growth in learning and training. 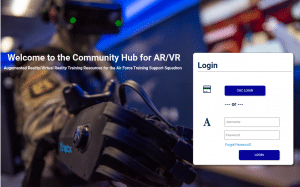 Over the past decade, there has been an explosion of interest in using commercial-off-the-shelf (COTS) Augmented Reality (AR) and Virtual Reality (VR) technology – such as the Microsoft HoloLens, Oculus Quest, and HTC Vive – for training purposes. These technologies provide an immersive sensory experience that helps the learner to “suspend disbelief” during training; allows learners to interact with the environment using naturalistic gestures, and; allows trainers to embed critical resources within the training environment – such as checklists, technical manuals, and animations – to enhance the learning experience.  While these technologies have the potential to positively influence training outcomes, there is a critical need to systematically match the users’ requirements with technology and content options to achieve the desired impact.

When applied appropriately, ARVR training can also help to reduce training costs by shifting critical training experiences “to the left” in the training pipeline. This results in more “reps and sets” before learners arrive at formal training events, thereby allowing them to hit the ground running when they get there. For example, learners can practice operating critical communication and navigation aids prior to arriving at a formal training course, thereby allowing them to immediately focus on their tactical mission skills. ARVR training is also considerably cheaper than conducting similar training on the actual airframe, which can cost upwards of $30,000 per hour. In addition, training on the actual airframe requires schedule deconfliction with both the operations and maintenance communities, thereby limiting the opportunities for training.

Unfortunately, developing ARVR training content imposes a number of non-trivial startup costs. For example, training developers first need to access realistic 3-D models of the critical technology with which the learners must interact. These models must be of sufficient detail such that the learners can interact with them during training. In some cases, such as in perceptual skills training, all that may be required is a model of the airframe’s outer skin. In other cases, such as when performing scheduled maintenance, the model will need to be fully interactive. If the training developer does not already have the necessary models, they must generate them with the aid of reference photos, videos, or Computer-Aided Design (CAD) files. To the extent that pre-existing models are available, training developers would not have to constantly “reinvent the wheel.”

“Having a central hub to share assets already owned by the Air Force greatly increases the value added of those assets. Being able to easily locate and download assets significantly reduces cost and time” says Kevin Audrain, who is an Innovation Developer at the Air Combat Command (ACC) Training Support Squadron (TRSS) Innovation Flight.  He continues by noting that “Asset stores are already industry standard.  Bringing this technology to the Air Force will align the Air Force with the rest of the ARVR industry.” 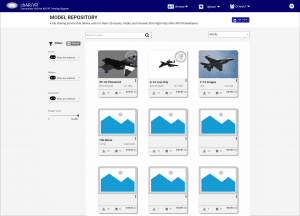 Figure 2. Screen capture of the portal’s file search page. The system is designed to mimic common e-commerce sites, such as Amazon.com. The top of the search page includes the query and sorting functions. Filtering functions are located along the left hand side. Each “card” depicts a unique model, image, photo or animation. Unclassified, dummy content has been inserted for demonstration purposes.

In many cases, it is not just the actual airframe that must be modeled. For example, in order to develop training for C-5 Galaxy Loadmasters, the training developer will need models of relevant assets – such as tanks, Humvees, and pallets – that are loaded on the plane. In some cases, these assets will be “pristine” and doctrinally correct. But in other cases, the instructor may want to include non-pristine or damaged assets, such as incorrectly secured pallets that will test the Loadmaster’s ability to visually identify potential problems. In summary, the number of potential 3-D models that are required for a single training event can be quite large, and beyond the capacity of a single developer to generate from scratch.

According to Dr. Wink Bennett, USAF Principal Investigator for the effort, “We are hopeful that documenting some of the content and lessons learned can create even greater efficiencies down the innovation road. When General Mike Holmes, Commander at Air Combat Command (ACC) at the time asked AFRL to get involved, he knew there was an opportunity to capture the innovations happening in the Combat Air Forces and leverage those to continue to grow ACCs innovation footprint for the future. We’re excited to be a part of all that!” In addition, Dr. Bennett notes that, “Other major commands (MAJCOMs) are pursuing similar approaches with a similar set of goals, and we are hopeful we can connect all these together to create a larger opportunity for the USAF writ large. All of this great work takes time from a lot of experts across the USAF. Our efforts continue to have solid support from our partners, Air Combat Command (ACC) and the operational community.”

Fortunately, not every embedded training asset has to be 100% platform-specific, according to Dr. Jeffrey Beaubien, a Research Psychologist at Aptima, who is leading the development team. “Many radios, engines, power units, and emergency equipment are reused across multiple airframes. As a result, we can develop 3D models of these technologies and then re-use them in multiple AR and VR training applications.” Even if these assets are not 100% identical, they often have very similar design philosophies. As a result, the same simulated asset can potentially be reused many times, provided that the differences do not negatively affect the overall training experience.

When complete, the secure web-based portal will allow Air Force training developers to share critical assets with one another, thereby preventing the need to constantly reinvent the wheel. Doing so will allow them do develop their training learning content quickly and more efficiently. 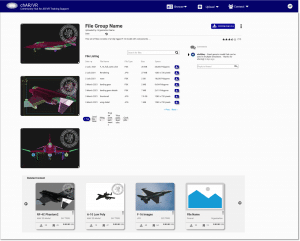 Figure 3. Depiction of the file details page. After selecting on a “card” in the main search page, users can access more detailed information about the asset before deciding whether or not to download it. In addition, the portal includes the ability for users to comment on assets that they have previously downloaded. When complete, the portal will also include recommendations for related content that are based on the user’s prior search history as well as their previously-downloaded content.

As a general rule, however, traditional file sharing systems often fail to be self-sustaining over the long term. This is because many users consume more content than they share with others. If the content isn’t constantly refreshed, users won’t return to the portal. Therefore, the Aptima-developed portal will also include other elements of social media – including threaded discussion groups, instructional webinars, and decision support tools – to develop a self-sustaining community of practice. The portal will also include a searchable database of the published research literature that summarizes the effectiveness of ARVR training, which is being developed by the Institutes for Defense Analyses (IDA) under a separate contract to AFRL. This database, which will summarize the research findings in lay terms, will help USAF training developers to better understand best practices and the art of the possible.

“There are numerous similar online communities of practice, both within the DoD and in the civilian sector” says Dr. Michael Garrity, Aptima’s Executive Vice President for Government Programs. “As part of our research and design activities, we have studied several of the most successful communities of practice and included similar design features. Our hope is to create an engaging online presence where instructors and training developers can share not only their training-related assets, but also their hard-won lessons learned.”

For 25 years, Aptima’s mission has been to improve and optimize performance in mission-critical, technology intensive settings. Visit www.Aptima.com.